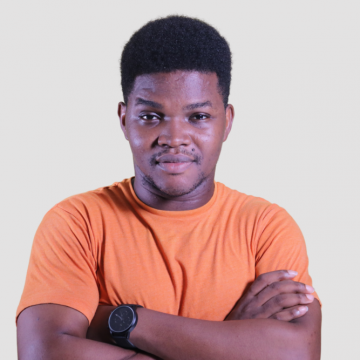 Joshua Alabi is the Founder of Kininso Koncepts (a storytelling company) a theatre and film Director, Content/Concept Creator, creative strategist, producer, playwright, teacher and Consultant. He was invited as one of Africa’s rising director alongside Jade Bowers from South Africa and David Kono from Cameroon to the Festival of the World (Theater Der Welt) Dusseldorf, Germany to talk about his work and join the Equity Forum panel session (where he also premiered his new work ‘SKIN’ at the festival).

Joshua has also been selected among several young global storytellers to train at the catalyst Story Institute and Join the HBO, Jada and Will Smith Foundation and US Department of State-Innovation Centre Funded project where he would be producing his television series. The writer/director of SNIPER, a play on mental health, depression and suicide. He co-produced/directed ‘Queen Moremi- the musical Reloaded, ‘Talk N do’ for the Rule of Law and Anti-corruption Program of the European Union/British Council on issues of Anticorruption, criminal justice system and Sexual and gender based violence.

In 2017, Produced/Directed 2 different play project for the British Council/UKAID program and United Kingdom’s DFID touring 10 Nigerian states about troubling issues such as insurgency, domestic violence, unemployment, corruption, impunity etc. same with ‘ImaginationTV’ created/directed in collaboration with ‘Junges Schauspiel, Dusseldorf (Dhaus) inspired by Chimamanda Adichie’s speech “Dangers of a Single Story and the film “Beast of No Nation’. He is also the Producer/Founder of KIFT- Kininso International Festival of Theatre, the largest international children’s theatre festival in Nigeria.